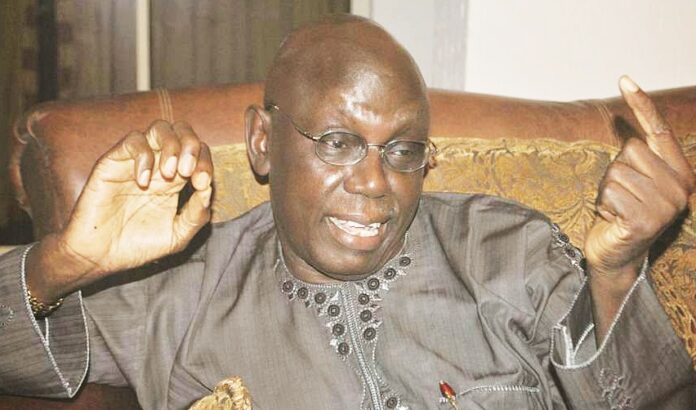 Let us begin this, if you please, with a cliché. Lagos State has had a chequered history. Firstly, you cannot talk about the former federal capital without immersing yourself in heavy but impressive statistics. It enjoys a well-deserved reputation as the largest megacity in Africa. Its productive capacity in the labour ward has yielded a 2020 population estimated by the UN at 14.3 million.

And to the envy of many a struggling African country, Lagos is rated the fourth largest economy on the continent. It boasts a GDP of $84 billion. If you compare that with Ghana’s GDP of $67 billion and Rwanda’s $10.4 billion, you should have no problem seeing that if Lagos were another African country, it would not be surviving on the financial crumbs from the table of the rich.

Yet Lagos is the smallest state in the country. Its land surface area is only 3,577 km about  one quarter of which is menaced by the lagoons. With its 14.3 million population on so compact a land surface, the state has the highest population density in Nigeria. Take a breath.

Secondly, you cannot peer into its history without finding yourself sucked into the vortex of its progressive fortunes from its founding by the Awori in the 13th century to its becoming the federal capital in 1914, and thence to its formal elevation as a state in 1967. The land was once inhabited by the Awori and the Bini. Name changes characterised its fortunes. It is awash in names, really. The Awori and the Bini named it Oko.

The Portuguese, the first Europeans to visit this land washed by the Atlantic Ocean but bifurcated into islands by the lagoon, gave it two names. They saw some similarities between the land and a part of their country and gave the area a similar name to that in their country; first they called it Onim and later and perhaps more appropriately and more befittingly given its geographical feature, Regiao do Lagos, Portuguese for a lakes region. Lagos is both a lagoon and a lake in Portuguese.

Another Portuguese explorer, Ruy de Sequeria, visited the area in 1472 and gave it a new name, Lago de Curamo. At the time Ado became the first Oba of Lagos, the area was known as Eko. That name is now said to be the original local Yoruba name for it.

Lagos saw a succession of masters too. It was part of the Benin Kingdom. It became independent of that ancient kingdom with the crowning of its first oba. The Portuguese did not colonise Lagos but in 1861 the British annexed it as a consular administrative entity. Lagos moved up in 1914 as the colony of Lagos and the capital of the new country called the Federal Republic of Nigeria when Frederick Lord Lugard formally amalgamated the southern and northern protectorates and the colony of Lagos. It retained that position until 1991, when it lost it to a new city in the middle of the country called Abuja that had been in the making since it was chosen as the new federal capital territory in 1975.

Modern Lagos State consists of three major islands, Lagos Island, Ikoyi and Victoria Island and the mainland. Well, there are minor islands too such as Snake Island.

There is a blot on the white canvass of Lagos. It is remembered, and not fondly, as the major centre of the unspeakable evil called slave trade. From the slave post established in Badagry, thousands of our fellow country men and women were shipped off to the Americas as slaves. The British banned slave trade in 1807. Oba Akitoye sided with the British and tried to ban it too. But given its vast economic importance, his people rejected his move and deposed him. The British brought him back and he regained his throne. The slave post in Badagry is, in the human quirks mining its own misery and misfortune, a tourist centre.

This, by no means, is an attempt to serve you with the chequered history of Eko. It would be foolish of the present company to make such an attempt. Our objective in recalling part of its history is decidedly modest – to show that today Lagos is much more than a group of islands. Lagos occupies a unique place in the history of our country. Lagos is rich because it is the commercial and financial nerve centre of Nigeria. The country’s main ports are located here.

As the federal capital territory, it was also the administrative and political nerve centre of the country. It is the only state that has remained as it was created by General Yakubu Gowon in 1967. All other the states created along with it has been divided and re-divided into more states, some as many as four. It is a stable state, blessed with a succession of rulers who were and are jealous of its special place in our national history, its place as the commercial and financial nerve centre of the country, as the most populous state in the country as well as the richest state in the country. Its wealth has transformed it into something of a modern miracle, something similar to what the Asian Tigers did. It can survive without the monthly handouts from the federation account. It has pumped its wealth into infrastructures, forcing the lagoons to yield pride of place to roads and bridges as well as modern homes and offices.

President Obasanjo once described Lagos as a jungle. It was not an unmerited description. The crime rate was the highest in the country. If Lagos were a tree, its branches would be weighed down by the influx of millions of birds that find refuge in its branches. The Dick Whittingtons have done the same: flocked and flock to it because they believe that anyone can make it in Lagos. The truth is less glamorous. Unable to find the gold on the pavements, many took to the crooked path of crimes. Lagos became a feared city to be avoided. Life became hard and brutal.

But much of that has changed. The rapid and focused development of the state has seen the jungle steadily transformed into a modern state and an economic power house. Nothing we have said here should remotely suggest that Lagos is a poster child for every good thing in the country. But it is a poster child for what a state can do for itself if its leaders have a practical road map for its present and future development.

The late Alhaji Lateef Jakande, perhaps the most pragmatic politician this country has had so far, turned the grief of the state into a gold mine. He responded to the harrowing traffic bottleneck housing shortage, the exploding school population and street trading as only a pragmatist could have done. He chose modest and utilitarian values above glamour in housing and school buildings. The military arrested his underground railway for no better reason than that since it was conceived by a civilian politician, it must be wrong and corrupt.

However, much of the changing face of Lagos began with the election of Senator Ahmed Bola Tinubu as governor of the state in 1999. He is the architect of modern Lagos. He laid the foundation for the paradigm shift in its economic and social development. An unwritten code of traditional ethics binds his successors to walk the same path with the same objectives. That is what makes Lagos different. And great. Eko is showing other states the way.