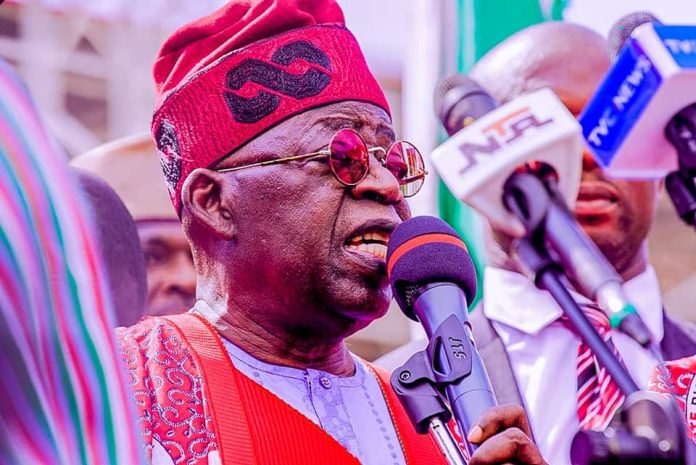 I don’t think any presidential candidate in the history of Nigeria has been vilified as much as Asiwaju Bola Ahmed Tinubu, the flag bearer of the All progressives Congress (APC).

Aside from Nigeria, I don’t think any presidential candidate in any of the prominent countries in recent history has been attacked with so much viciousness.

Donald Trump versus Hilary Clinton comes close. In the United States, ahead of the 2016 presidential election, there were campaigns to stop her from becoming the first female president of the country. Steve Bannon, whose name (Bannon) I coined the term ‘bannonized,’ was employed for that hatchet job. And he did it very well.

He is an American media executive and political strategist who was hired by Trump for the sole aim of mudslinging. He threw so much dirt at Mrs Clinton that it almost became part of her. The term ‘crooked Hilary’ became like a slogan of supporters of Trump. Bannon once said that ‘’my goal is that by November 8, when you hear her name, you’re gonna throw up.’’ It is the same thing that the Nigerian version of Bannons seek to do to Tinubu. They want to make him a pariah. They want people to hiss whenever they hear his name.

It’s obvious they are out to tarnish the image of Jagaban. Before his interview with the British Broadcasting Corporation (BBC), the Nigerian Bannons were in control of the narrative. The word out there was that ‘’Tinubu was avoiding interviews because of his incoherency.’’ But after that interview, the momentum seems to be on Asiwaju’s side.

Some people are asking: what could be responsible for this level of campaign of calumny against him?

In the BBC interview, the former Lagos governor himself said, ‘’I’m the frontrunner, that is why I’m getting many arrows.’’

There were campaigns to stop the re-election of Goodluck Jonathan after he was perceived as inept and the chief enabler of corruption. We were even told that ‘’he gets drunk before 9am in the presidential Villa.’’

But Jonathan was president and was running for a second term. Tinubu is not vying for re-election. This is his first time running for president. Every word of his is being scrutinized. Every action or step he takes makes the news.

A mountain is currently being made out of his reliance on ‘teamship’ for interviews and meetings. Well, there is a saying that you are only as good as your team. And I think Tinubu knows that to perform very well in any facet of life, you really need a good team.

Tinubu emphasizes teamship: something he demonstrated in his most prominent outing of recent. If he has a team just for answering questions in public, discerning minds believe that he would definitely have a team when it comes to governance. His antecedent and his current moves suggest that his team would be given free hand to carry out their duties. And the array of intellectuals around him gives a ray of hope to those who are sitting on the fence in regards to the 2023 election. Like I mentioned earlier, you are only as good as your team.

How do you bribe your way into becoming a political appointee if the man at the helm of affairs is said to be very rich and more concerned about the competence of the appointees rather than their financial status? How do you control someone who was not only governor of Lagos but holds sway till date as his successors are members of his party? They think he is already too powerful as it stands. They can’t imagine someone like him wielding almost absolute power come May 29, 2023.

Also, he has not been forgiven for the fall of President Goodluck Jonathan. He was the leader of the forces from all walks of life that drove the greatest upset in Nigerian political history.

While Jonathan’s campaign was floundering, Buhari’s campaign ahead of 2015 election was the height of his populist movement that had been building up in the North for years, and Tinubu knew that teaming up with Buhari was all that was needed to be done to win and cement his place in history as one of the people who brought about ‘change.’

He has said it himself that he is after a good legacy. He wants to leave his name in the footprints of time as one of the best presidents in history. Not an easy feat to achieve given the circumstances. But also not impossible. Nigeria is endowed with human and material resources. What is lacking are the personnel to tap those resources.

A young lady who has been following me on social media for five years wanted to know my thoughts on the candidate of the ruling party. She wanted to know how she would console herself if he wins because most of the people she follows post negative things about him. She wanted to hear something different.

Like many political newbies on social media, she is a staunch supporter of Peter Obi, presidential candidate of the Labour Party. And like many of the ‘OBidients,’ her choice of Obi is as a result of several of her favourite influencers backing him.

I started with the story of Babatunde Raji Fashola, who governed Lagos from 2007 – 2015. I made her understand how Tinubu appointed Fashola who was a regular guy as his chief of staff when Lai Mohammed resigned from that position to run for governor of Kwara in 2003. He doesn’t have to know you from Adam. All he needs to know is your capability.

I also informed her of how Tinubu appointed Vice President, Yemi Osinbajo as Attorney General of Lagos State. I sent her Mr Bayo Onanuga’s article: Tinubu and Osinbajo: The true story of how they met.

She was surprised to hear all that. She thanked me and has since referred many of her friends who are new to politics to me.

To be honest, many of the APC youths on social media weren’t doing a good job in trying to promote Asiwaju. Many of them have little or no experience in information dissemination or image making that’s why they feud bitterly with fellow youths they disagree with.

They tried to go lower than the opposition instead of winning people for Asiwaju. It was getting messy until the likes of Bayo Onanuga and Dele Alake came on board. Two men with many years of experience under their belts. Two men who deal with facts, not fiction. Onanuga’s statements have won over many people who were on the fence. Alake on the other hand announced his arrival on the scene via a space he hosted on Twitter a few months ago.

On that space, he talked about Tinubu and his antecedent and was able to win new supporters for his principal.

No one can promote you like yourself. Tinubu with that interview was able to dispel rumours of not being able to answer questions himself. It was a relief for many of his supporters, an eye opener for many of the sceptics, and a blow to many of the members of opposition who ran with the narrative that he lacked the intellect to be interviewed by Arise TV. Well, they don’t come bigger than the BBC.

Yusuf Mohammedhttp://yusufcolumnist@gmail.com
Yusuf Mohammed, an experienced Nigerian journalist, writer and editor, holds a Bachelor of Arts degree in History and International Relations from Al-Hikmah University. He cut his journalism teeth at Business Hallmark newspaper in 2013. From Business Hallmark, he moved to New Telegraph newspaper where he was an editorial staff from 2015 – 2017. In 2017, he joined The Next Edition as a pioneer staff and helped to take it to the summit of online platforms. He had a second spell at Business Hallmark in 2019 before establishing The Columnist Ng, a platform dedicated to publishing articles of renowned Nigerian writers. Mohammed's writings have been published in several Nigerian newspapers and magazines such as Daily Trust, Premium Times, The Cable and Newswatch. His tribute to the late football great, Diego Maradona was published in three magazines, including Air Peace in-flight Magazine in 2020.
RELATED ARTICLES