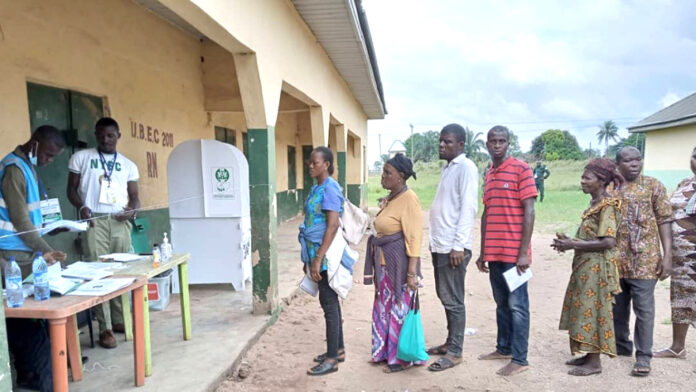 In a worrisome development, less than 15 per cent of registered voters cast their ballot in the recent Anambra State governorship election. What does this portend for future elections?

It was a victory of sorts for the people of Anambra State. The much-feared gubernatorial election in the state went without the predicted violence and bloodletting. Charles Soludo, the candidate of the All-Progressives’ Grand Alliance, APGA, was declared winner of the election held on Saturday, November 6, in the early hours of Wednesday, November 10.

Soludo defeated 17 other candidates in the election, which was extended to Monday, November 9, to allow voters in Ihiala Local Government exercise their franchise.

Florence Obi, the returning officer of the Independence National Electoral Commission, INEC, who announced the results, said Soludo, a former governor of the Central Bank of Nigeria, polled 112,229 votes to defeat his closest rival, Valentine Ozigbo of the Peoples’ Democratic Party, PDP, who got 53,807 votes. Andy Uba, the candidate of the All-Progressives’ Congress, APC, came third with 43,285 votes.

According to the returning officer, there are 2,466,638 registered voters in Anambra State, but only 253,388 were accredited for the election, while 8,108 ballots were voided.

Speaking at the INEC, headquarters, Awka, capital of Anambra State, Obi said: “Professor Chukwuma Soludo having scored the highest number of valid votes was declared winner of the election.” The former university don won in 19 of the 21 local government areas of the state.

Since his emergence as governor-elect, messages of congratulations have been pouring in for the new governor-elect. Most of his opponents in the election have also congratulated him and offered their hands of friendship.

President Muhammadu Buhari, who is a member of the APC as Uba, in his congratulatory message to Soludo, a member of the presidential economic advisory team, enjoined him to rally other stakeholders to tackle the enormous challenges confronting the state and the Southeast in general.

The president said he looked forward to working with the Soludo administration for peace, security, and the development of the country. Buhari also commended the security agencies and INEC for a successful election.

Reacting to his victory, Soludo said: “Let me say that with utmost humility and gratitude to God, I accept the result of the 2021 Anambra governorship election, as declared by INEC”, adding, “And this reflects the supreme will of the Almighty God and the overwhelming sacred mandate of the people”.

Indeed, the CBN governor has reasons to thank God. About eight months ago, he escaped being killed when gunmen attacked him in his hometown in Isuofia, Aguata Local Government Area of the state, while having an interactive session with youths of the community. Three of his police escorts were killed during the attack, while a commissioner in the state, was abducted but later released. Little wonder he dedicated his victory at the poll to the three slain police officers.

Irked by this development, President Muhammadu Buhari, on Thursday, October 21 gave a marching order to the Nigerian service chiefs that elections must hold in the state. Babagana Monguno, the national security adviser, who briefed the media on the outcome of the president’s meeting with the service chiefs, said: “The president has made it clear that the armed forces and all law enforcement agencies must make sure elections take place, even if means overwhelming the entire environment with presence of security agencies.”

Consequently, Usman Alkali Baba, the inspector general of Police, IGP, on October 14, announced the mobilisation and deployment of 34,587 police personnel, three Police Helicopters, technical capabilities of the Police Airwing, the Force Marine and the Force Animal Branch, and other operational assets for the Anambra State governorship election.

But the Indigenous People of Biafra, IPOB, heightened tension in the state when it declared that the whole of Southeast should be locked down by observing one week sit-at-home from November 5 to November 10. Emma Powerful, IPOB’s media and publicity secretary, in a statement issued in Akwa, Anambra State on Saturday, October 23, said the IPOB directive became imperative over the failure of the federal government to release Nnamdi Kanu, the secessionist leader.

However, the group rescinded its order on November 4, following the intervention of prominent Igbo leaders, especially the leadership of the Ohanaeze Ndigbo, an apex Igbo organisation. Eventually, Anambra had a peaceful election. There were no instances of violence, ballot snatching or fighting in any polling unit in the state.

But the damage had been done.

Out of a total 2,466,638 registered voters in Anambra State, only 253,388 voters were accredited for the election, representing less than 15 percent of the state electorate.

Some political observers believe that the threats of violence scared away a sizeable number of the electorate. The situation was further compounded by breakdown of some INEC machines deployed for election. And this meant that the election which started on November 6, had to be extended to Tuesday, November 9, to allow the electorate in 131 polling units in Ihiala Local Government to exercise their franchise.

Nevertheless, everything went well in that local government area.

President Buhari and many prominent Nigerians, including the candidates in the election, have all commended the security agencies and INEC for the peaceful election.

Collins Mathew, the national chairman, Movement for Election Monitoring and Transparency Initiative, MEMTI, said the fact that Buhari gave the IGP a free hand to do his job helped the police to be effective in the state. He commended the police for preventing the political gladiators to use security challenges to either disrupt the election or manipulate it against the popular wish of the people.

Besides, Mathew pointed out that the removal and redeployment of Joseph Egbunike, a deputy inspector general of police, who headed the security team in the state, gave credence to the conduct of police and election in the state.

“Some pundits believe that the redeployment of DIG Egbunike who is from Anambra State was indeed a masterstroke by the IGP as he saw what others didn’t see in terms of security of the election, which maybe firstly that DIG Egbunike is from Anambra, secondly that it would be that since he is from Anambra, Egbunike might, after all, not been able to be free to perform the role assigned to him well, and the IGP wanting neutrality decided to deploy him 24 hours before the election, an act that paid well,” he said.

The lawyer urged the IGP to use the same template in the future elections.

“Now there is full hope that with the Anambra poll gone, the coming elections in Osun and Ekiti, as well as the 2023 general election, will no doubt have no issues, as they will follow the same pattern with the current leadership of the police in charge”, he said.

Mathew also expects Buhari allow the voters in Ekiti and Osun States to freely elect their governors on June 18 and July 16, 2022, respectively.

Soludo, 61, a professor of economics, will take over the reign of government from Governor Willie Obiano in March next year. His election victory raises high hopes for the state.

“I will make Anambra a technology entertainment home and will turn the party, APGA, into a cooperative movement. Governor has given us an airport; we will now concentrate on the provision of roads. We will tackle all roads in Anambra, especially in Nnewi because of the city’s importance as an industrial hub of the state.

“Nnewi is contributing immensely toward the economic development of Anambra State; so, we will not leave them behind in our developmental strides,’’ Soludo said ahead of the election.

Now that he has won, Soludo faces the onerous task of fulfilling his electoral promises and proving to Anambrarians that he is, indeed, the real solution to the state’s developmental problems.