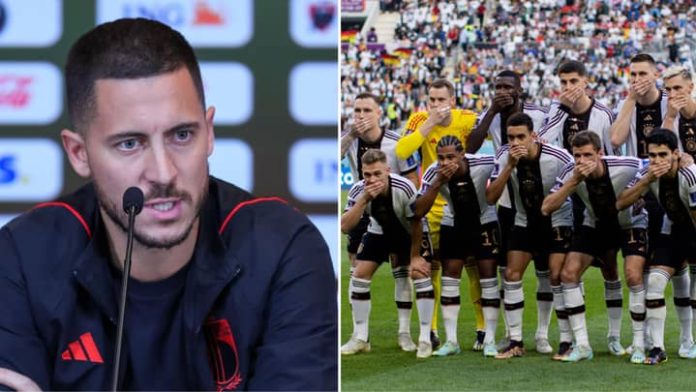 The captain of Belgium’s national team, Eden Hazard has hit out at Germany’s decision to cover their mouths in protest before their defeat to Japan on Wednesday.

Germany decided to pose for their pre-match team photo with each player holding a hand over their mouth, a symbolic gesture of being silenced after they and six other nations – including Belgium – were banned by FIFA from wearing the LGBTQ+ inclusive ‘One Love’ armband. However, Hazard argued that the Germans should have stuck to the football, given that they eventually fell to a shocking 2-1 defeat.

He said: “They’d have done better not to do it [the protest] and to win instead,” Hazard claimed. “We are here to play football. I’m not here to send a political message. Other people are better placed for that. We want to be focused on football.”

While Germany’s loss leaves them third in Group E and needing a win against Spain in their next match to be sure of qualification, Hazard and Belgium ground out a narrow 1-0 victory over Canada. While there was no protest towards FIFA, Belgium’s opener did see Kevin De Bruyne clash with manager Roberto Martinez and defender Toby Alderweireld, in a match that was as tight as the scoreline suggests