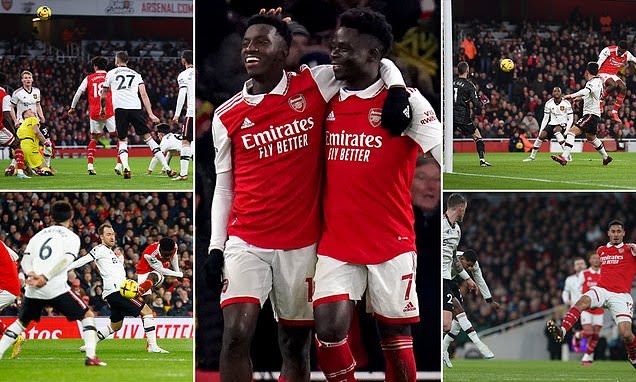 Sunday’s version of Arsenal vs Manchester United, a pulsating 3-2 Gunners win at the Emirates Stadium, taught the Premier League a new yet familiar lesson.

The Arsenal-Manchester United rivalry is very much back, as fans and neutrals alike will dream of this fixture growing to become what it was earlier this century.

The Gunners just keep on rolling as Mikel Arteta’s first-place youngsters have beaten bitter rivals Tottenham and now age-old foes Man United in one week’s time, collecting 50 points to stretch its table lead to five points on Man City with a match-in-hand.

But Erik ten Hag’s Manchester United showed grit after being pegged back vs Crystal Palace in midweek, fighting through weariness before coming up just short. The Red Devils’ 39 points are behind third-place Newcastle United on goal differential.

There are certain Premier League non-geographic rivalries that just make the fixture list complete, and for a long time we’ve been waiting to see Arsenal and Manchester United give us a top-four fight with meaning.

Sunday’s encounter joins United’s early season win in reinvigorating the rivalry and allowing fans of either side — as well as neutrals — to wonder whether there’s hope of Mikel Arteta and Erik ten Hag giving us a mini-Arsene Wenger vs Alex Ferguson.

The scrap between Bruno Fernandes and Gabriel Magalhaes gave us hints of Roy Keane and Patrick Vieira (at different positions, of course) and the fire in the eyes of goal scorers Marcus Rashford and Bukayo Saka in particular showed us what it can mean to score a big goal in this fixture.

What would this have looked like with Casemiro, Gabriel Jesus, and Diogo Dalot?

Arsenal project still a bit of ahead of Man United
Erik ten Hag doesn’t have all of his pieces and the distance between the two sides may not be a gulf but it’s still noticeable.

Even when accounting for home-pitch advantage, injuries to Diogo Dalot and Anthony Martial, and — most critically — Casemiro’s suspension, Arsenal was ready to go from the jump and United spent much of its day adapting to the hosts’ dictation of the game.

Thomas Partey and Granit Xhaka limited still-influential Bruno Fernandes, and the Gunners had well over half of the ball plus a significant advantage in shot attempts, and expected goals.

But Ten Hag’s defending did not allow many chances to a gifted team that needed a remarkable goal from Saka on its route to a point — there are questions about the backs on Nketiah’s marker — and Raphael Varane has been a bit of a cheat code when healthy.

United’s a step behind the Gunners right now, and Nketiah’s winner was deserved and decisive, but sign us up for front row seats when these fixtures come around next season.