The men who speak with God 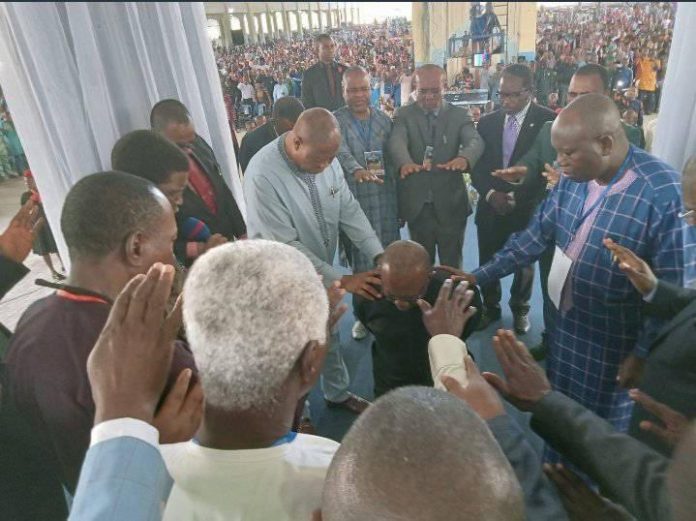 What glittering titles they have – primates, apostles, prophets, general overseers, men of God, etc. These are the religious leaders who claim special relationship with God and are privileged to speak with him; they presume to know the mind of the Almighty; they speak in tongues to lend some authenticity to their claims and lace their speeches with ‘God tells me…’

They have become part and parcel of our national politics, reflecting the changing mores in the infernal struggle for political power, the only power that matters in all human societies. Once you have it, every other thing is added unto you. Ah yes, the late Dr Kwame Nkrumah got it right. He advised his fellow African leaders to first seek the kingdom of politics.

In the times before these, the babalawo and other traditional juju men once held the stage as the go-to authorities who operated between the living and the dead and between now and the future only they could see. They could swing an election in favour of every political scoundrel who sought the help of the gods. The Igbo call the eyes and ears of the gods. Politicians beat the paths to their doors in a desperate search for assurances of election victory. Goats and chickens paid the supreme sacrifice to make the gods happy.

It seems that the paths to their doors now spot overgrown weeds, indicating a certain degree of abandonment in the uncertainties of an uncertain political world. The politicians have made a choice between God and the gods and are sticking with God. But the eyes and the ears of the gods have not lost out. The politicians are wise enough not to put all their eggs in one basket. The gods serve as their fallback position in case they fail to persuade God to their political cause or causes.

Wherever politicians are gathered today there must be present a man of God as evidence that the politicians are wise enough to always seek the face of God. That was amply demonstrated in the heat of the controversy over the Muslim-Muslim presidential ticket of APC last year. At the unveiling of the presidential candidate and his running mate, the party picked some men from motor parks in Abuja and dressed them in borrowed robes as bishops to grace the gathering. The party sought to show that the Christian community was not opposed to the Muslim-Muslim ticket. It was a wretched attempt to religiously legitimise what did not require such legitimacy. The lack of wisdom in dragging religion into our leadership recruitment process is worse than unfortunate.

It may be right and proper for politicians seeking power to seek the face of God. They even do better because they seek the face of God, and they seek the faces of the gods. President Goodluck Jonathan sought the face of God in 2011. The men of God rallied round him with each claiming he heard from God that Jonathan was his choice for president. It came to pass and thus confirmed the dubious wisdom of beating the path to the doors of the men of God. Seeking God’s support in the pursuit of individual political ambitions has become the new political modus operandum – just to sound intellectual for the moment.

In 2015, Rev Father Mbaka, he of the controversial adoration ministries, turned his back on Jonathan and gave the thumbs up to Muhammadu Buhari. But in 2019, he gave the thumbs down to the president. Still, Buhari won his re-election. This, I think, introduced some confusion as to how well or poorly the men of God who claim to know God’s mind really do. How did the man of God fail to properly read God’s mind in 2019?  The question points to one fundamental problem in dragging God into the soulless pursuit of political power in which lies, bribery, deceit, death, destruction, and false promises are the means by which men and women ascend the political throne at all levels in our country.

No man, no matter how well-steeped in he may be in his faith, knows God’s mind, or the minds of the gods. Our politicians are victims of men who exploit their fears and the uncertainty inherent in the nature of our national politics. Their prophesies are nothing but puerile guesses. Their ranks swell with man a 419er. Still, the politicians flap around them like moths attracted to bright lights.

Many moons ago, Pastor Chris Okotie, the musician turned into a shepherd to recover the lost sheep and lead them back to the Lord, told the country and the rest of the world that he had conferred with God and received his assurance and blessing that he would become the next president of Nigeria. Okotie’s name does not feature on the list of our former presidents. Did God ditch him for someone else or did he mishear the Lord?

Politics is a dirty game; ours is dirtier than most. We are the second most religious country in the world after India. It counts for something. Our religiosity, genuine or faux, are on full display in every nook and cranny of the country. Our men of God would do well to give him a good name consistent with our religiosity. They must not continue to take the Lord’s name in vain just because doing so improves their circumstances, as in building mansions and riding fleets of expensive and even owning jets – all at the expense of the politicians.

We cannot substitute their prophecies for the people’s electoral decisions with the instrumentality of the ballot paper. By all means, let the politicians seek the face of God or the faces of the gods. What the men who speak with God must not do is to suggest that a man who clearly rigged an election had the support of the Almighty God. Nor should they try to persuade us that God or the gods help the voters to make wrong choices.

They should instead turn their attention to persuading God to help us elect competent men and women into various levels of political leadership. The emergence of a leader who proves incompetent, provincial, and indifferent must not be ascribed to God. Therefore, if the men of God cannot separate the chaff of thieves from the grains of honest men and women, then we must dismiss them as largely fake.

As you read this, many of the politicians are waiting on the men of God to receive a divine assurance of their victory in the general elections. Some of them will be losers. Some of the men of God claim that God has told them who our next president will be. Others say they are yet to hear from God. All of them are mis-hearers of the divine voice.