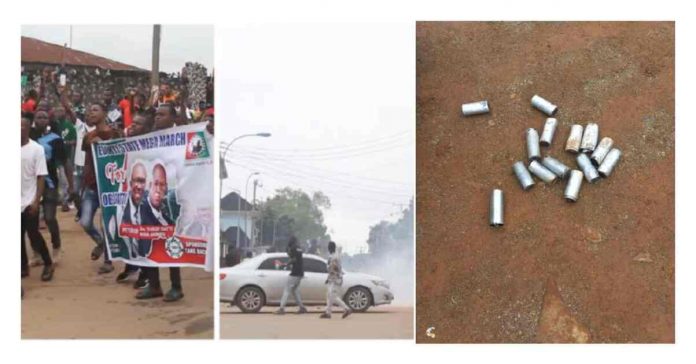 According to reports, men of the Nigeria Police Force tear gassed the supporters, who were in their thousands, causing them to disperse.

Many of the Obi-dent movement members reportedly fled the venue for safety, while some were allegedly arrested by the police.

One of the leaders of the Obi-dent movement, Mr. Ugoama Stephen, who spoke to journalists in Abakaliki, at the venue, called on the state governor, David Umahi to address the issue and condemned the attack on the youths of the state who, according to him, came out only with the Nigerian flag to demonstrate their support for a preferable Presidential candidate.

“My phone was smashed by the police this morning. We demand that the people that they (police) have arrested be released unconditionally because they have not done anything,” he said.

“This movement has been held in every other part of the country, including the state where we have a presidential candidate and they were not fired. Nobody disturbed them because it was a peaceful rally.

“Why is Ebonyi’s case always different? The Governor, David Umahi needs to address this. As he (Umahi) said before that Ebonyi votes belong to APC, he is an individual and he should allow us to support a candidate that is our choice.