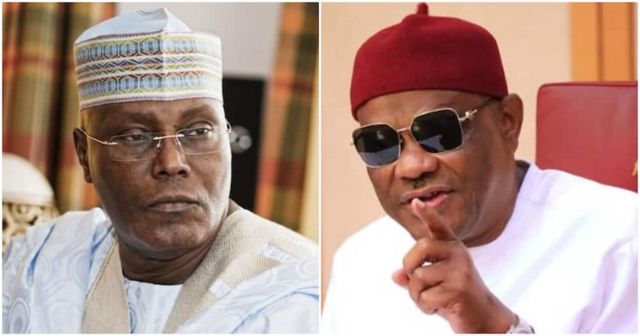 The Ayu-must-go vanguards yesterday vowed not to join the campaign train of presidential candidate Atiku Abubakar for as long as Dr. Iyorchia Ayu remained in office as the party’s national chairman.

Rivers State Governor Nyesom Wike is leading those asking Ayu to step down in the spirit of equity in the party.

But in a swift response, Atiku told Wike and his allies that he could not force Ayu out of office.

He urged them to reconsider their stand, saying he was surprised by the withdrawal of the Rivers governor and members of his group from the PDP presidential campaign council.

Rising from their meeting at Wike’s Obio-Akpor country home, members of the team insisted that there would be no deal with Atiku until Ayu vacated his office to allow an acting chairman from the South to lead the party.

The aggrieved stalwarts made their position known in a resolution read by Chief George.

They maintained that their position was not negotiable as the chairmanship of Ayu undermined the unity and constitution of the party.

George said they were deeply concerned about the division in the PDP despite its age-long internal mechanism designed to guarantee inclusiveness.

He said it amounted to putting the cart before the horse for Atiku to have gone ahead to publish his presidential campaign council list without addressing the structural imbalance in the party.

“Consequently, we resolve not to participate in the campaign council in whatever capacity until the resignation of Dr. Iyorchia Ayu”.

Jang accused Ayu of compromising the May 28 and 29 presidential primaries through his conduct.

He likened Ayu to a bad referee, who assisted one side to score a goal during a football match and later blew the whistle to end the competition.

He said the group was behind Wike, adding that everything the Rivers governor had said remained the only truth.

He said they were backing the governor for standing for justice, fairness and equity, recalling that the party was founded on such principles.

Jang said: “We want to take this opportunity to assure our teeming supporters in the PDP that everything Governor Wike has been saying is not for him as a person.

“And it is not because he lost the primaries and he was not taken as a vice-presidential candidate as some people are making it look like.

“We are gathered here to assure you that we are in support of what he is saying because he has been saying nothing but the truth.

“Some of us who are founding members of the PDP know that we formed this party on the principles of fair play and equity. But as you heard from our elder, former military Governor of Ondo State, it is true that everything is being done for us to have internal democracy in the party.

“But for Senator Ayu to go and embrace Sokoto State Governor Aminu Tambuwal, calling him the hero of the convention, meant that there was a private arrangement with Tambuwal to shortchange other contestants, including Governor Wike.

“Here was a referee, who helped one of his sides to score a goal and then blew the whistle. This is not what we formed the PDP to do for Nigerians.

“Therefore, we unequivocally ask that Ayu must step down so that having got the presidential candidate from the northern part of the country through his assistance, he should as well step down so that the national chairman can move to the South so that the party can be united for the campaign towards 2023”.

Describing members of the group as solid men and women, Gana said PDP could only achieve excellence in leadership if it evolved a proper structure.

He said the group was determined to ensure a just, fair, principled and constitutional structure in the PDP and commended Wike for having the boldness to speak the truth.

Gana said: “We are solid party men and women who wish the very best to Nigerians through our great party.

“The PDP ruled Nigeria before for 16 years of excellence. We are desirous that such kind of excellent governance comes back to this country.

“But that cannot be achieved unless we have a proper structure of the party as designed by the founding fathers.

“We are men and women who are committed to the issues of justice, fairness and equity.

“You cannot build on a faulty foundation. This call for the chairman to step down or resign is not because any of us is aggrieved, but because we believe it is important to ensure a just, fair, principled and constitutional structure for the party.

“If we want to restructure Nigeria, we should have the courage to restructure our party. That is why we have met and decided that this is extremely important and therefore, we want Nigerians to know.

“It is because we want to bring back to Nigeria good governance, fairness, equity, the kind of thing that will allow us to have peace and stability in the nation.

“This is why we are making this demand. It is not for personal reasons whatsoever. We also want to emphasise that we have no apology to anybody for supporting Governor Wike because he is a good man, a very committed person.

“We want to assure the nation that what he has been saying is because he loves Nigeria and he loves the truth to be told so that people will know the truth.

“If Nigeria will be free, then we have to have people who are willing and able and courageous enough to tell the truth. We like to use this opportunity to really salute our governor. We are PDP. But we want things done justly, fairly and equitably.”

Makinde said his demand for Ayu’s exit during last week’s Southwest consultative meeting in Ibadan underscored his support for the group’s position.

He added: “Our leaders and elders have basically highlighted all the issues. They are not different from the things I mentioned at the Southwest Consultative meeting.

“That is exactly where we are. We hope that the powers that be listen to the voice of reason and do the needful.”

Also, former Governor Ibrahim Dankwabo said they would not give up until the party embraced fairness, equity and justice.

“For all lovers of unity in this country, in the north in particular where we are most affected, this ticket must never succeed. And we will make sure we defeat it in such a resounding manner that nobody in his right senses will ever think about it again, at least in the near future for our political journey in Nigeria.

“So, we are set on it and we are determined to kill it. Our people are mobilised, and our people are ready for the election.

“I and Dogara alone aren’t the only ones involved in this. Indeed, we are leaders of groups of about 40 leading Christian politicians in the north. We started work on this years back when we suspected that if a Muslim emerges from the south as the candidate for any of the political parties, there is a risk of what has happened that will happen.

“Now, there are two issues here. First and foremost, we are politicians and our job is to win elections and form government. Second, when we looked at this ticket and decided principally, it excludes northern Christians from governance. It will not be wise for us to hand ourselves and exclude ourselves from the incoming government.

“So, while we plan that the same faith ticket of APC should fail, we also believe that we should align with one of the leading political parties that has the chance of winning.”