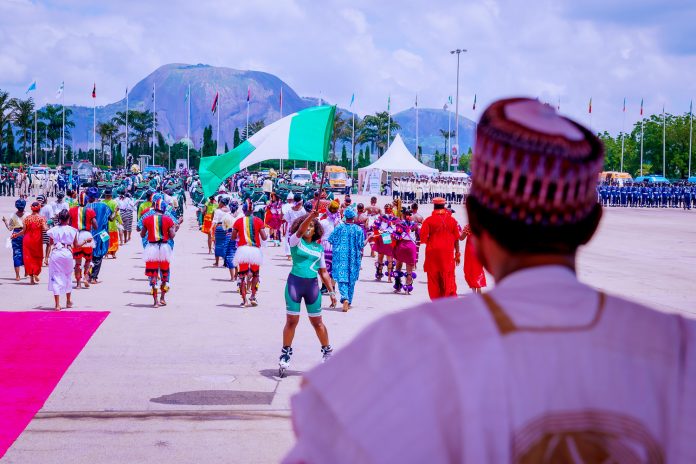 When Nigeria lowered the Union Jack and raised the green-white-green flag that heralded its coming of age on October 1, 1960, there was boundless joy in Nigeria.

It seemed like the unwrapping of a gift because you knew it was a gift but you did not know what kind of gift was wrapped inside the gaily decorated wrapping paper.

So in journey terms we did not know how the journey would be, what kind of speed we would use and what kind of roadblocks we would meet on the way. It was, truly speaking, the equivalent of flying blind. But we were enthusiastic. Five short years later, we met a major roadblock.

The soldiers thought they knew what the problem was. They came breaking the soil with their big boots and in the process, they also broke our hearts when they killed some of our leaders which in turn led to revenge killings the revenge killings dragged us into a war that lasted 30 months and consumed one million lives. As it is often said, the rest is history.

Since then we have been trying to bind the wounds and rebuild the country. It hasn’t been easy. In fact, the Governor of Imo State, Chief Sam Mbakwe was so frustrated by our underachievement that he suggested that it was better for the British to come back and run Nigeria again. He knew that was not possible but he was simply expressing his loss of faith in the Nigerian project. But loss of faith wasn’t going to solve the problem. The military thought that they actually had the answers to the problems of the country. They took over the government again in December 1983 and stayed on till 1999 when they were practically forced to go.

The civilians stepped in again in 1999 and have been in charge of our affairs since then in a civilian democracy. Twenty-three years later we are scratching our heads again, wondering as Chinua Achebe put it when the rain began to beat us. Some people have blamed the colonialists for putting together in an unworkable marriage two distinctly different sets of people in 1914. But 1914 is many years from today and we have had enough time to panel-beat the relationship into shape or go our separate ways.

Others have blamed our woes on the military rule for making corruption a growth industry, for paying little attention to the transformational attributes inherent in the country, and for failing to use the country’s immense resources to bring development to all the nooks and crannies of Nigeria.

But the military boys went away more than 20 years ago though they left behind two of their own, Olusegun Obasanjo and Muhammadu Buhari who became civilian Presidents of Nigeria from 1999-2007 and 2019 to date respectively.

These two men though wearing civilian clothes have run the country in the structured and unified format of military arrangements which is unsuitable for a multi-linguistic, multi-religious and multi-ethnic country like Nigeria. Since 1999 and even before then Nigerians have been clamouring for the restructuring of the country into a less centralised, and more diversified country.

The advantage of such an arrangement would be that each federating unit would grow at its own pace, utilising its comparative advantage to its advantage. Since the return to civil rule that has been the battle cry of those who want a more progressive country. Since then that has not happened. In 2014 the hope of Nigerians was raised when the Goodluck Jonathan administration convoked a well-constituted National Conference.

The conference did its duty as diligently as it could, submitting more than 600 recommendations that could have transformed Nigeria if they were implemented. But the government that set up the conference did not touch the report apparently because it didn’t think it had enough time to deal with it. And the Buhari government that took over has not looked

The ruling party even set up a committee headed by Governor Nasir El-Rufai of Kaduna State to look into the matter of how we can have true federalism. The committee travelled far and wide within the country and produced a report that many people considered excellent, but the government party that set it up has not looked in that direction at all.

The effect on those who think that Nigeria is capable by its resources and manpower of being a better country is frustration. Several other problems have arisen in the last few years to drive Nigeria into a hole. How to get out of that hole is the problem we face today.

There is extreme insecurity in virtually all parts of the country and it is becoming grossly unsafe to travel by road or by rail to any part of the country without the fear of being killed or kidnapped for ransom.

Two geo-political zones South East and South West have declared their intention to opt out of the Federation in the exercise of their constitutional right to self-determination. This has led to an escalation in tension and violence in those parts of the country and as of today, there is no viable solution in sight. Seven years ago we only had one serious security threat, Boko Haram to contend with.

Today, there are multiple security threats including ISWAP bandits and terrorists, herders and other sundry criminals who have made life miserable for Nigerians. This security situation has affected farming, investment, tourism and employment possibilities and poverty alleviation. We have now been officially named as the poverty capital of the world, a position hitherto held by India.

Many young, well-educated and employable Nigerians are now relocating to other countries in droves. This includes 10, 000 Nigerian doctors who are now plying their trade in the United Kingdom, United States, Austria, Canada, Saudi Arabia and South Africa among others. Even though President Buhari had promised that he would lift 100 million extremely poor Nigerians out of poverty the situation for the accomplishment of that looks, bleak, very, very bleak. With a population of 216 million, we are just behind China, India, the United States, Indonesia and Pakistan.

Our population is huge. But that is not the only problem. The major problem is that we are, according to World Atlas, the 16th country with the most population under age 18.

About 50.4% of our country’s population is said to be under 18. That is where the danger lies. The other danger is that more than 20 million of these young people are out of school. So crime will fester and the government will be able to do little or nothing because it is flat broke.

The government has informed us that 92% of the government’s revenue will be devoted to debt servicing next year. This is not debt repayment but debt servicing only. So we will then be left with 8% for salaries of civil servants, pension’s payment, infrastructure, subventions to universities and polytechnics and servicing of our embassies abroad etc.

The government has already gone beyond a reasonable limit in its borrowing so it will not be able to borrow more. And the price of oil, our main resource has come down. Besides, we are unable to meet the quota allocated to us by OPEC because of low capacity and theft. So the picture looks bleak, very, very bleak and no one in 1960 would have believed that 62 years later Nigeria would be in this sorry state where a dollar goes for 735 naira in this import-dependent country.

In 1960 the dollar was only 71 kobo. In 1960 you could buy an air ticket to travel to London for 150 naira. Today you have to count the money in millions before you can travel abroad. In those days when General Yakubu Gowon was in power, Nigeria was paying the salaries of workers in the West Indies because Nigeria had more money than it knew what to do with it.

In fact, Gowon had said that money was not the problem but how to spend it. And we spent it like the prodigal son. The title of Chinua Achebe’s book “There was a country” appropriately fits what Nigeria was like in those days.

Today, Nigeria looks ugly, very, very ugly but we cannot blame the mirror. It is not the mirror that makes the country look ugly. The mirror is only a true and correct reflection of Nigeria today.

Many of its citizens are in captivity; three million of its citizens are involuntarily living in internally displaced centres; most of its public universities have been shut for seven months now and our kids are roaming the streets of several towns; pensioners are dying from failure to be paid their pensions for several years; workers in some states have been owed salaries for months including their new minimum wages; non-state actors command people to stay home and not go out for work or business and they obey this illegal but alternative government because the government lacks the capacity to govern.

At this point, the country is socially insecure, politically unstable and economically amputated. Nigerians, therefore, expect that the politicians campaigning now will bring their magic wand in 2023 and perform magic. But there is no magic. We have to go back to basics, having a country where people do not go to Abuja with a bowl to ask for money. That is money without work. The country cannot work without work. No country works that way. No country can progress that way. That is why Nigeria has not moved fast or far in its post-independence journey.