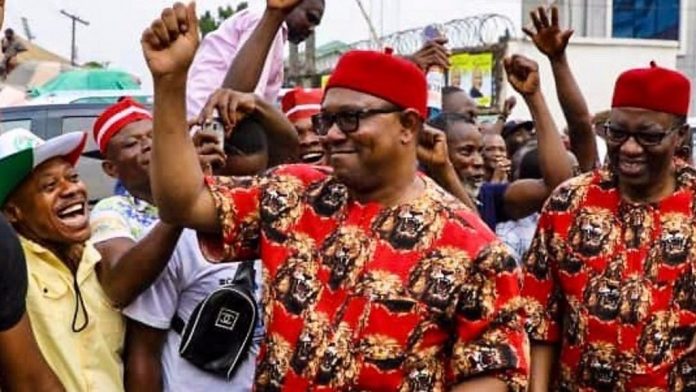 I do sympathise with Ndigbo who seem to have been marginalised by their two big brothers and kept out of the presidential loop. After all, the British colonial authorities were understood to have constructed our national leadership on the tripod of Hausa/Fulani, Igbo, and Yoruba. The rest of the tribes are the drawers of water and the fetchers of firewood. Not a bad deal. If two out of the three continue to chop and relegate the third to picking up the pieces, we are right to suspect there is lack of fairness among the crowned princes of our national leadership.

I keep wondering about this: who is to blame for Ndigbo being fenced out of the presidential loop by their big brothers? In every general election circle, Ndigbo make it a point to remind the rest of us that it is their turn to occupy Aso Rock. I have always supported this claim in the fond hope that with an Igbo man in Aso Rock, I could be lucky and be invited by my Igbo friends to eat ofe Owerri and ofe nsala there. No such luck for them so far and, therefore, no such luck for me.

I have two serious problems with Ndigbo – and I am not raising these issues for the first time. I raise them again here because they still baffle me. Maybe I am baffled because I do not understand the ways of Ndigbo. Anyway, my first problem is that they seem to believe that by making claims for their turn, the other tribes would be fair and just enough to respect their claim and bury their ambition and leave the stage entirely to them. Not likely. Power, political power is not dashed or given to people on a platter of justice and fairness. It is either won or taken. Those who seek it must work for it.

My second problem is, do they really know what they want? Can they really seek to rule Nigeria while at the same time trying to break up the country, as in the murderous activities of IPOB and the milder ones by MASSOB? I thought they would pursue their presidential ambition as Nigerians seeking the right to rule Nigeria.

When Peter Obi threw his hat into the ring, I thought it reflected a new thinking on the part of Ndigbo to seek power and work for it like other tribes. In 2019, Obi was the presidential running mate to Atiku Abubakar, a former vice-president and a permanent fixture in the presidential contest. PDP was their party on whose platform they sought power and, sadly, lost.

In that position Obi, former governor of Anambra State, was to play a second fiddle. He was chosen by his principal to reach out to Ndigbo as partners with the north in the locus of national political power. This year, Obi decided to play the first fiddle and declared for president on the platform of the Labour Party. I had had the occasion to say here and elsewhere that what he did was an act of uncommon courage.

He knew and knows the odds stacked against him. His party is relatively new to the presidential contest. Its war chest is much lighter than those of APC and PDP. The size of the war chest matters but it is not always about the size or the weight of the war chest. Other variables do come into play and sometimes change the narrative in ways least unexpected. We have seen something of that with the Obidient rallies organised by hordes of young Nigerians. They are responding to a new phenomenon in our national politics represented by Obi. We are yet to see where these rallies will lead.

I had expected Obi’s fellow Ndigbo to support his presidential ambition, if only to make the point that they too are prepared to work for power and will not wait for it as a handout from the rest of the tribes of Nigeria. Instead, those who should recognise the point Obi is trying to make in running for president are the ones who casually dismiss his ambition in a language dripping with sarcasm. They believe that Obi is wasting his time and luring Ndigbo to waste their votes next February and that supporting what they believe will be his failed ambition will deny them a place at the table in the new federal administration. This is clearly a case of self-sabotage by those who prefer the crumbs falling from the table to feasting at the table itself.

Chukwuemeka Soludo, former governor of the Central Bank of Nigeria and now governor of Anambra State, a state once ruled by Obi as governor, pointedly told Obi that an Igbo man would not become president. I have heard that before. The late Ojo Maduekwe once described, rather unkindly, those who were clamouring for a Nigerian president of Igbo extraction as ‘idiotic.’

Why do they want it and don’t want it? It baffles me. I expected them to rally round Obi, not in a clannish way but in a manner that serves notice on the Hausa/Fulani and the Yoruba that Ndigbo are pushing hard for a fair deal in the power loop. At least I expect those of them who refuse to take the crowd pulling Obidient rallies seriously not to disparage Obi and his legitimate political ambition. And if I may borrow from Maduekwe, I think it is idiotic to dismiss his ambition and the rallies that greet him in towns and cities in various parts of the country as nothing to write home about.

Secondly, whatever may be the eventual outcome in his quest for president, Obi may succeed in creating a third force, call it a third major political party, in the country. A third major political party will save the nation from what has become a relay race between APC and PDP with the leaders and their followers drifting from one party to the other and back again as it suits their political purposes and interests. If he achieves this, he would have done more than enough to positively disrupt the political status quo.