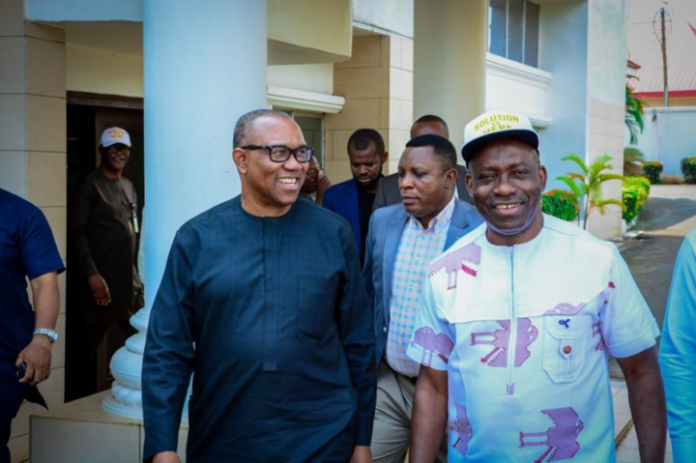 Soludo and Obi, on Thursday, met at Awka, the Anambra State capital at St. Patrick’s Catholic Church during the thanksgiving mass for Most Rev. Paulinus Ezeokafor in celebration of his 70th birthday and were seen embracing each other while exchanging pleasantries.

When Soludo got into the church, he quickly went to where Obi was sitting and hugged him, while people watched with surprise.

The governor had in an article titled, ‘History beckons and I will not be silent,’ dismissed the chances of the Labour Party candidate in the 2023 presidential poll.

The article generated reactions across the country and particularly from Obi supporters, who heavily criticised the governor.

However, Soludo, speaking during the thanksgiving mass, said he would soon be meeting Obi to iron out their differences, adding that their rift was essentially political.

He also dismissed the rumour of $28m he allegedly collected to run down the LP presidential candidate, saying he would have been a trillionaire if he was into such.

He said, “When I came in, I quickly went to where he sat and hugged him; people watched with bewilderment as if it was a drama, asking is it not the same people quarrelling?

“Let me tell you, we spoke two times just last night. We are brothers. You know I am not one of those politicians that speak from two sides of the mouth. I can’t pretend.

“There is no rift between Obi and me at a personal level. Nobody snatched each other’s wife. What appears to be the rift between us is fundamental political differences. Nothing else.”