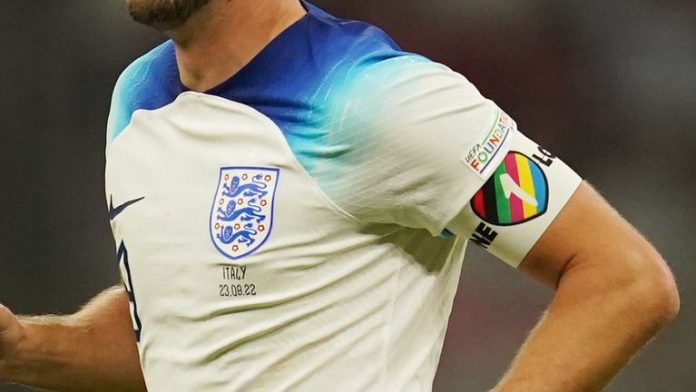 England will not wear the OneLove armband at the World Cup in Qatar, with the u-turn announced just three hours before their opening match against Iran.

The FA had been adamant that England’s Captain Harry Kane would wear the armband as a message of anti-discrimination and support for the LGBTQ+ community.

But on Monday morning, FA CEO Mark Bullingham said England had been exploring whether there is “another way to show our values” after FIFA threatened to book any captain wearing the OneLove rainbow armband in World Cup matches.

Less than an hour later, a statement released by the Football Associations of England, Wales, Belgium, Denmark, Germany, The Netherlands and Switzerland confirmed they would not wear the armband.

“We were prepared to pay fines that would normally apply to breaches of kit regulations and had a strong commitment to wearing the armband. However, we cannot put our players in the situation where they might be booked or even forced to leave the field of play.

“We are very frustrated by the FIFA decision which we believe is unprecedented – we wrote to FIFA in September informing them of our wish to wear the One Love armband to actively support inclusion in football, and had no response. Our players and coaches are disappointed – they are strong supporters of inclusion and will show support in other ways.”