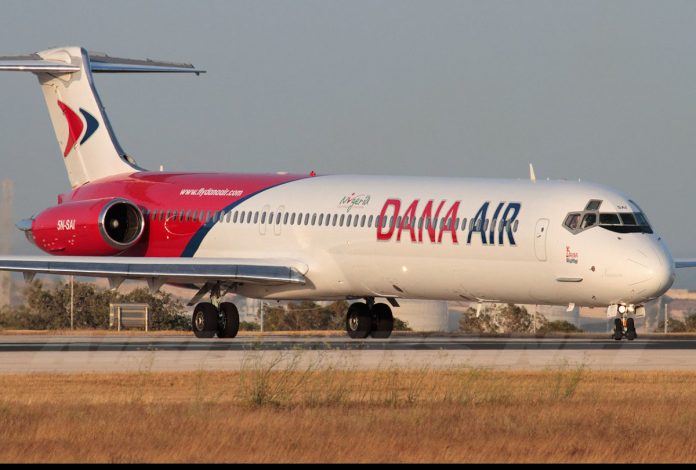 NCAA had said it suspended the operating licences after “discovering that the airline was no longer in a position to meet its financial obligations and to conduct safe flight operations”.

In a document, dated July 20, 2022, NCAA said Dana Air operated several flights on the MD 80 fleet with no licensed captain.

It also revealed that it had previously sanctioned Dana Air and its personnel for maintenance violations.

It added that the airline also conducted flights with overaged captains multiple times.

“Recall also that on 14th and 15th of July, 2022, the authority carried out an investigation into the flight operations of Dana Air during April 2022,” NCAA said.

“Dana Air operated several flights on the MD 80 fleet with no licensed captain. A captain of over 65 years of age sat on the jump seat, while a senior first officer on upgrade training sat on the left seat with a line first officer sitting on the right seat.

“On the 20th of April, 2022, a re-qualifying captain, flew with a line captain, instead of a line trainer (instructor) or a check airman.

The authority said the chief pilot of Dana Air, who does not have an NCAA ‘Check Airman Authorisation’, also conducted checks.

It said flight deck crews scheduled for flights disregarded flight duty times and crew rest regulations; adding that the zapways rostering system utilised by Dana Air, although a good system, is open to manipulation by the scheduling and rostering staff.

“Dana Air’s director of flight operations, conducted checks on the aircraft even though his Check Airman authorisation had expired on the 12th of September, 2020 and, in addition, he was over 65 years of age,” it added.

“One of Dana Air’s captains who had attained 65 years of age in July 2021, operated several flights on the jump seat. Also, his Check Airman authorization expired on 23rd August 2021 but he continued to exercise the privilege.”