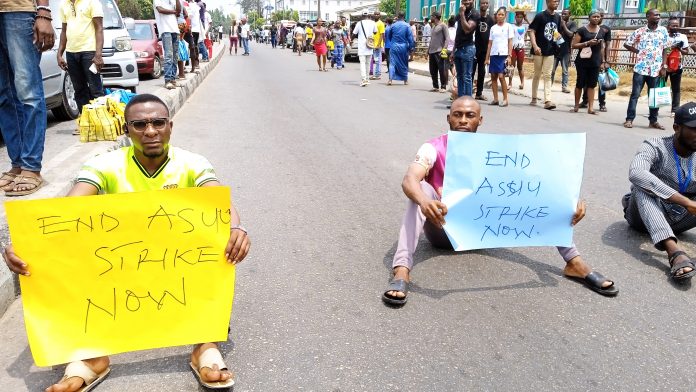 The National Association of Nigerian Students (NAN) has revealed plans to storm Abuja to protest against the prolonged strike by the Academic Staff Union of Universities (ASUU) via a new timetable for its nationwide protests.

In the timetable, signed by the ‘President-Elect’ of the student body, Usman Barambu, dated Monday, NANS scheduled the protests to hold zone by zone, from its Zone A to Zone F, with Abuja being the location for a final protest.

The protests, which have already begun in September, will run till October 11, 2022, after which Barambu will lead the “Abuja shutdown.”

The NANS President said, “You will agree with me that on February 14, 2022, ASUU embarked on an indefinite warning strike which had led to various phases of its strike activities for the past seven months, due to ASUU and the Federal Government’s inability to resolve their issues.”

He therefore directed all zonal, Joint Campus Committee and Students’ Union Government structures to align with the protest schedule.

“I am glad to inform you that we will remain resolute in making sure our demands are adhered to and in other for adequate coordination, I have directed the following national officers to oversee the peaceful conduct of the protest in the following respective zone in conjunction with the zonal and state structures,” the statement added, listing officials of NANS in each of the its six zones to lead the protest activities.

NANS had grounded activities on the major highways in the country in the past one week including the Murtala Muhammed International Airport in Lagos, on Monday in protests against ASUU strike.