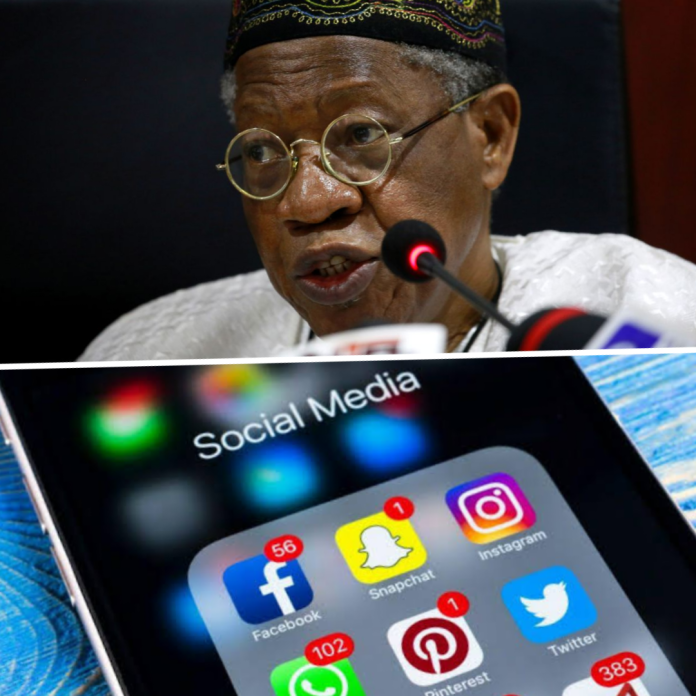 The minister of information and culture, Lai Mohammed, has served notice that big brother is looking over the shoulders of the social media community to bring some sanity into what they do and how they do it to protect the society. Not many people would disagree with him. The excesses of the social media are, to say the least, disturbing. They recklessly libel people and peddle outright falsehood against individuals, groups of persons and especially public officers, President Buhari not excepted.

Even more dangerous is the unbridled use of incendiary language to make Nigeria look like a country on the verge of catching fire. Mohammed is right to say that it would be irresponsible of the government to do nothing and let this go on until perhaps, the lit match is thrown into a pool of gas.

We saw something of this in the print media from the late eighties to about the end of civil rule in 1999 when the country was virtually overwhelmed by a new genre of print journalism in which untrained hands, desirous of exploiting the political crisis for financial gains, floated newspapers whose strongest points were arrant sensationalism and embellished falsehood. The stories they purported to report had nothing to do with the screaming banner headlines. They knew what they were doing because many newspaper readers then and now buy newspapers on the basis of their screaming headlines. We called them junk newspapers. But I am afraid they did not earn junk Naira; they earned the same Naira that became progressively scarce for the mainstream print media committed to good journalism in which the need to report facts trumped the murk of mock journalism.

But let us be fair to those junk newspapers that had their days of infamy at our collective expense. Nigerians are excitable people. They delight in newspaper stories that speak ill of people in power, no matter how incredible or outlandish the stories might be. In character, they welcomed the junk newspapers with open arms. And more and more of them joined the crowded market of gutter journalism.

At Newswatch magazine, we held a periodic meeting with our distributors and vendors. At one of such meetings, several of them suggested that our magazine must join the growing trend of junk journalism if we must survive in the increasing inclement media weather. They must have been right. But we stuck to our principles and the Naira failed to flow, and we paid the price.

That tells you that the junk newspapers did become a brand, patronised by the high and the low. When some of them threw the black paint in the faces of some of their well-heeled patrons, they knew what it meant to be a victim of media smear and falsehood. Government largely ignored them. It was journalism without borders at its most wretched. But in the end, their excesses and recklessness exerted a combined force to drive them out of business. Sanity returned to the print media again and had held – until now.

Until the internet and the mobile telephones democratised information dissemination. The social media have become the platforms of this new power in the hands of those who were once thought to be powerless. Armed with his mobile phone, a man becomes a reporter and editor, a dangerous one-man editorial squad. With this versatile tool, he writes, takes photographs and circulates them. He does not pretend to be a journalist and therefore, does not feel bound by the rules of the game. His stories have one side and one side only. He does not need to be fair and balanced. His sole objective is to peddle whatever germinates in his manured mind and takes it to the social media platform. It is not for him to consider the consequences.

I do sympathise with Lai Mohammed. In trying to sanitise the social media, I am afraid he has set a herculean task for himself. I would like to caution that given the nature of the social media, he should proceed with caution lest he be driven by frustration to reach for the sledgehammer. And that would be a very costly mistake. He knows as much as anyone else that attempts to regulate the media under all forms of government draw the ire and the fire of the public.

Suspicion of attempts to gag the media usually takes on a life of its own. We are all sensitive about freedom of speech; the same freedom that made it possible for the junk newspapers to flourish when they did; the same freedom that makes the unregulated social media possible. Freedom of speech and of the press does not distinguish between foolish speech and wise speech; nor does it discriminate against bad and irresponsible journalism in favour good and responsible journalism.

The social media have become a strong media brand. They have their social uses. That much we must admit. Touching them might feel like touching the Lord’s anointed. We acknowledge their role, reach and power. They birthed the Arab spring in 2010. It was the first demonstration of the power of the social media using nothing more lethal than the computer and the mobile telephone. One man sitting before his computer screen in Egypt hatched and spread a revolution within and among Arab nations that changed for ever the architecture of their governance.

The social media exposed under-aged voters in Kano State in 2019. It was not possible for the public relations fact spinners in INEC to deny what the mobile phone cameras revealed. INEC was forced to admit that underage voters had always slipped through its net in various parts of the country.

But the social media are not a paragon of media responsibility. Their failings are becoming glaring. They too have succumbed to the manipulation of facts to satisfy economic, political and other exigencies. They increasingly elevate gossip into a fine art of information dissemination.